Forty years ago I stood at the altar next to my beloved, repeating the marriage vows after the minister, surprised to find they were different from how I remembered, somehow finding just enough voice to be heard down the aisles, full of trepidation, full of confidence anyway, with my life spread out in front of me like a pile of presents waiting for me to unwrap them. 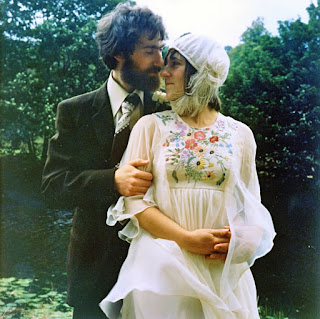 I wrote my speech on a scrap of paper on the way to the wedding reception. Jenny the bridesmaid, aged 4, ran up and down between the tables shouting while I strained to make myself heard. My new bride and I slipped away to the nearby canalside to have some romantic photos taken by my old school-friend Tim. Eventually we said our goodbyes to all the friends and relations and were driven to the railway station, thence to Devon for the honeymoon. When we changed trains at Exeter, the friendly and sharp-eyed train guard made sure we had the carriage to ourselves.
Two weeks later we were on our way to Gadaffi's Libya, where I would take up the post of English Language Teacher at the Petroleum Institute. That was followed a year later by a similar assignment in Saudi Arabia. Those two years changed my life. Returning to England I retrained as a computer programmer, bought a house, and brought forth a child.
Twenty years later my children had flown the nest or were about to, my parents were dead, the computer work had finally dried up, my house was sold, and my dream of becoming a Church minister was history. At this point my life as I knew it came to an end.
I bought myself a canal boat to live on and the next twelve years were spent wandering the watery wilderness. As the old song goes, “Life goes on, long after the reason for living is gone”. Probably the only reason I can sit here writing this now is because my wife never gave up on me, which I suppose proves I married the right one, no-one else would have stayed the distance. I survived as best I could, taking whatever work came my way – shop assistant, driver, chambermaid (yes!). Canal life was beautiful but hard. I remember one night searching for firewood in the pouring rain so that I could light a small fire, as there wasn't enough money to buy fuel for the stove. All through this – and more – my wife stuck with me, keeping me going, because I just didn't care any more.
There's a great passage in Ezekiel where the prophet is taken in a vision to a valley where the bones of Israel's dead warrior's lay strewn. God asks: “Man, can these dry bones live?”, and all Ezekiel can say in response is: “Only you can answer that” (my rendition). That was exactly how I felt about my life, and so apparently did God. Because bone by bone, piece by piece, he reassembled my life.
It hasn't been easy. I'm older and I hope wiser now. Almost all the older generation who witnessed my marriage have gone from the Earth, Gadaffi is dead, my best man (and best friend) won't talk to me, my children are forging careers in art and music, Jenny is managing a holiday business in France, my photographer friend became director of a well-known company, left (to run a hotel, lost it) then made a heroic come-back. Time passes.
I don't know what the future holds in store for me, but I hope I will live it authentically, and I hope I never stop until I get to the very end. This weekend the two of us will celebrate with a quiet couple of days on the coast and a meal out. I think we deserve that.
Posted by Wysiwyg at 10:29 pm 1 comment:

A Tale Of Two Babies

Life is precious, but we don't realise just how precious it is until we come close to losing it.
It was 1981 and my wife was pregnant with my first child. In due course she was admitted to hospital and I returned home in the evening to await a call with the good news. Coincidentally at about the same time, Jilly (not her real name), my colleague at work, was admitted to the same hospital to give birth to her own first baby.

As I happily went to bed that night, little did I suspect the dreadful ordeal my wife was going through. All through the night she was in labour but no baby appeared. For nearly twelve hours she struggled with the pain and effort of childbirth, with only gas and air to help her, until she was at the point of total exhaustion. In the morning when the day shift arrived they quickly ascertained that the baby was in trouble; the umbilical cord had got twisted, essentially cutting off the air supply to the little one, putting its life at risk. I was called on the phone to attend as soon as possible. An emergency caesarian section was performed under general anaesthetic. My son was safely delivered by the medical team, wrapped up and settled in a cot next to my wife's bed. 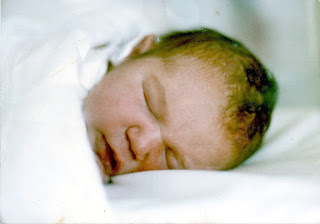 When I arrived they were both sleeping off the anaesthetic, which had crossed the placental barrier. I sat with them, bathed in the bliss of knowing they had come through okay. For the next three days my visits were to someone who could scarcely mumble through parched lips, and a baby almost completely concealed under its covers, his eyes determinedly shut.

While they convalesced in hospital, I carried on working as normal. Soon after my son's birth, news came round the office about Jilly. She too had given birth by caesarian, but under anaesthetic she had inhaled something which had started a serious infection in both lungs. Antibiotics were working, but not fast enough. Her lungs were filling with fluid so that breathing became more and more difficult. Her husband was called to her bedside and told to expect the worst. She was transferred by ambulance to the nearest specialist hospital 30 miles away. It was a race against time. Would she survive long enough for the antibiotics to clear the infection?

It became hard to concentrate on my work. In the evenings after visiting my wife I would heat up a ready meal and sit alone in the house we had moved into the previous year. It seemed unfair, it seemed wrong, that my wife and baby were doing well while Jilly was at the point of death. So of course I prayed. When I had finished praying I realised that I had nothing better to do so I carried on praying. My prayer became a sort of dialogue with the Almighty. As the evening turned into night and darkness filled the house I continued. I didn't need the lights. I knew my way round the house with my eyes shut and the Lord was my eyes – I didn't need to see.

This became a habit. Working half in a dream during the day, nocturnal petitions to God at night. I did not, I would not, give up.

Several days passed and I heard no further news. Until one morning word came round that Jilly was out of danger. It would still be a long time before she was well enough to return home, but when she did, it was to a magnificent welcome. Her house was adorned with balloons and streamers, and a huge banner that said “Welcome home Jilly” draped from the first floor windows. It made the front page in the local newspaper under the headline “Miracle Mum comes home”.
I later found out that doctors from all over the country had come to see the woman who had somehow carried on living when she should have died. She became a famous medical curiosity. I also found out how many others, friends, family and church, had also been praying hard for her recovery. 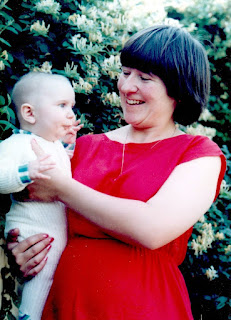 Both boys were quite independently named after gospel writers.

My son has grown to become a noble, gentle man, an artist, a thinker. And he has a brilliant gifted musician for a younger sister. My wife is still blossoming and still beautiful. The last I heard, Jilly and her son were doing fine.

The reason for this story, I suppose, is that life really is a miracle, and it shouldn't take a brush with death to remind us of that fact. Every day we wake up and stretch is a brand new miracle, fresh out the bag.

In the film “Bill and Ted's Excellent Adventure”, Keanu Reeves strives to say something wise; what he comes up with is this: “Be excellent to each other. And party on, dudes!”. Which, with a slight stretch of the imagination, is what Jesus said: “Love the Lord your God... and love your neighbour as yourself”. Loving God comes down to the same thing as loving life.

Life is a celebration, a feast, a party. Every day. Every miraculous, wonderful day. Enjoy!

Posted by Wysiwyg at 6:02 pm No comments: