All Is Full Of Love


Isn't it annoying when you've got a tune going round in your head and you can't remember what it is? It happened last night as I was listening to the internet radio station Chill FM. Slipped in between two tracks of angelic ethereal beauty, one short piece that I know well, and almost certainly have on CD. Is it Nitin Sawhney? I picked my way through Prophesy one track at a time; not there. Moby? So I stepped through Play as if crossing a stream on stepping stones. What a lovely stream, how it flows! But the mystery music did not swim by. Transglobal Underground? I followed that cavern down to the end but failed to hit gold. Was it on the World Chill compilation? World Chill on Chill FM? How cool would that be? But no, the trail was getting colder.

In the end, I found a lot of things that I was not looking for. I found the Lost City Of Atlantis, the Lost Chord, I discovered the source of the Nile and the proof of The Trisection Of The Angle, I unearthed a sledge called Rosebud, found Lord Lucan and Shergar but that track got lost in the undergrowth.

I had listened to some fine music along the way though.

So instead I looked up the third of the trio of tracks I had heard. It was a remix of Bjork's All Is Full Of Love.

That's when I realised my failed search had been successful, because without it I would never have listened to all that great music. My CDs were All Full Of Music which I had not been looking for. 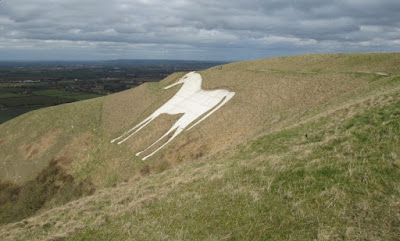 Last Friday I was walking on the edge of Salisbury Plain near the Westbury White Horse. It was a clear sunny Good Friday and a fair number of people had come up the hill – walkers like me, motorists and their families, army jeeps, a trail motorbike, hang gliders, model plane fliers. Everyone appeared to be enjoying themselves. The wind blew steadily up the North side, keeping the hang gliders and model planes aloft; children ran around up and down the grassy slopes shouting and playing. I had got out of the house, stretched my limbs and breathed the fresh Spring air.

Before I reached the White Horse I stopped walking. I was no longer a hiker, but a listener. First I heard the silence, a stillness stretched over twenty miles of secluded fields and trees, virtually uninhabited bar the odd army quarters. As I stood still, the quiet slowly receded and the sound of the breeze softly stirring the grasses sang in my ears. Suddenly a bird started up behind me, and then the music of the skylark fluttered down from the sky with a sound like water rippling over pebbles. That skylark - and for all I know, farther and farther, all the birds of Somerset and Wiltshire, for it seemed as if all time and distance existed in that moment.

I'm sure everyone up at the White Horse got what they wanted on the hillside that day. I had my walk and a pint of Cornish beer at the end. And if that was all I was looking for it was all I would have got. But like someone crossing the road I stopped, looked and listened. All is full of love, and we pass by without noticing.
Posted by Wysiwyg at 6:56 pm No comments: